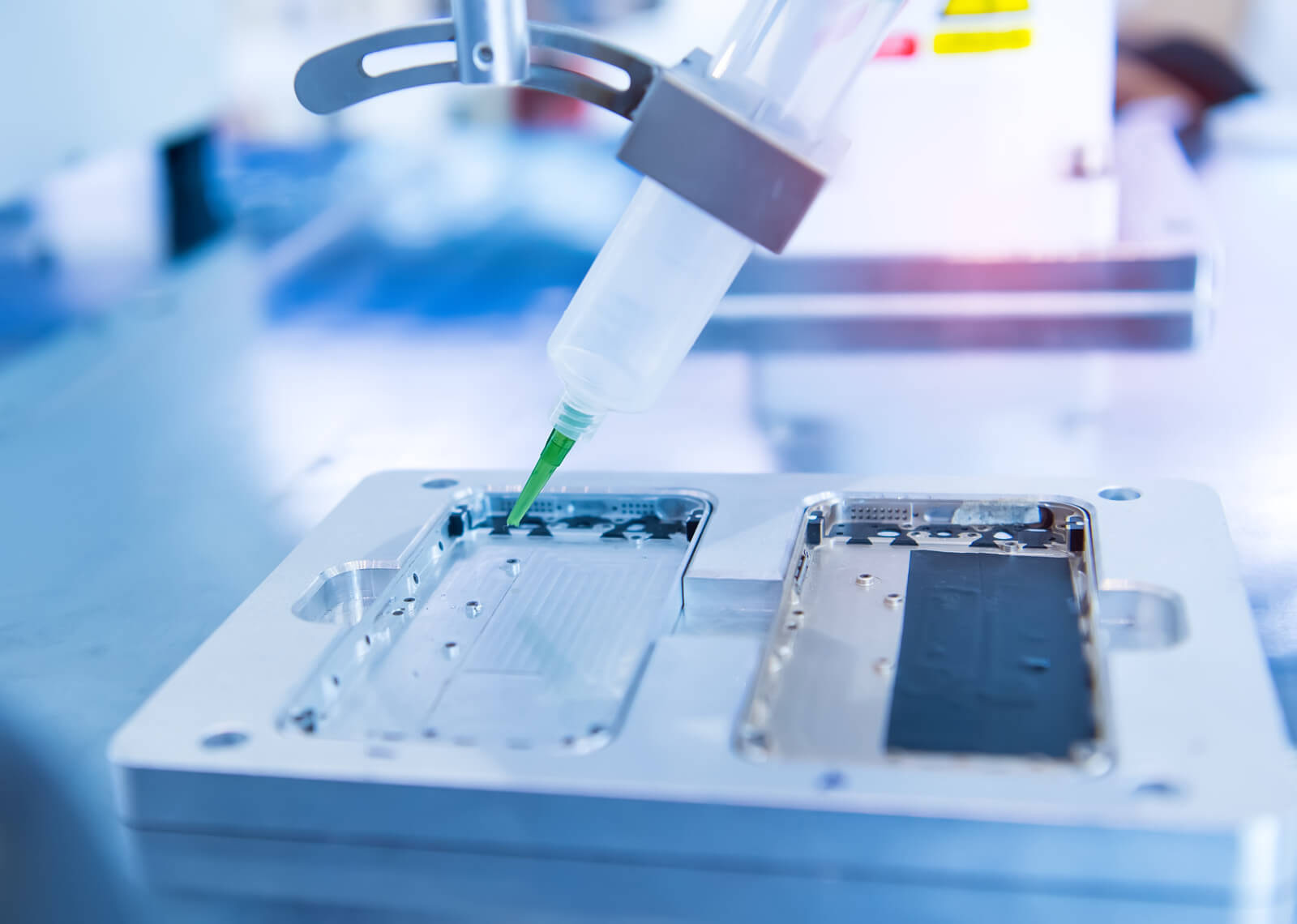 Unlike typical free radical curing adhesives & sealants, cationic UV epoxy adhesives can be formulated to cure between opaque substrates. The delay UV cure epoxy (sometimes referred to as dark cure) still requires light to activate the adhesive but due to the unique polymerization mechanism of highly innovative and engineered epoxy cationic systems, the cure will complete in absence of additional light.

What is a Free Radical Adhesive?

Typical UV and LED adhesives require 100% light exposure in order to start and finish polymerization. This is mainly because typical UV products cure via free radical polymerization which occurs incredibly fast. These types of adhesives are acrylated urethane polymers.

The typical mechanism begins with UV or LED light activating photoinitiators in the adhesive. The photoinitiators highly reactive radical species. These free radicals almost instantaneously attack reactive monomers. The reacted monomers then become radicals as well which in turn react with other monomers. This reaction chain continues until propagation resulting in a cured polymer. Normally free radical reactions are extremely quick (generally <10 seconds with intense light). This is what makes UV cure acrylated urethanes so convenient and desirable in many applications. This also means, however, restrictions to its use. One of them being direct exposure. Free radical systems need to be fully exposed to the light source until fully polymerized making it nearly impossible to bond through opaque substrates.

What is a cationic epoxy?

UV cure epoxy adhesives polymerize via cationic mechanisms. While slower than free radical adhesives, cationic epoxies still cure quickly. Most standard cationic epoxy adhesives will cure in under 60 seconds. UV and LED cure epoxies also have photoinitiators that will activate when exposed to the appropriate light. The photoinitiators create a Lewis or Bronsted acid. These acids then react with the monomers to create positively charged cations. These positively charged cations will then react with another monomer to create more positive cations. These reactions will continue until propagated.

What creates a delay cure?

The difference in cationic systems and free radical systems is the time it takes to attack the reactive monomers. Free radicals will react with monomers extremely quickly (seconds). Acids, on the other hand, can exist for much longer (up to days) without reacting with monomers. Only in the presence of light will acids be pushed to react quickly with the monomers.

The acids created can be temporarily tied up before being quenched resulting in an “open time” for the liquid epoxy. This allows users to briefly expose the epoxy with light to pre-activate the adhesive, then use the open time to mate substrates together. The pre-activation and open creates the delay UV cure epoxy system. Once the open time is completed the epoxy will continue to cure without the need for further light. Generally, the epoxy will be fully cured after 24 hours or accelerated with some heat. Open times will vary depending on the specific product. Open times can be anywhere from 30 seconds to 2-3 minutes.

Epoxyset is a leading manufacturer of engineered adhesives and potting compounds used in advanced technology applications. We supply superior quality products that are used in electronic and microelectronic, medical device, semiconductor, fiber optics, and assembly industries.